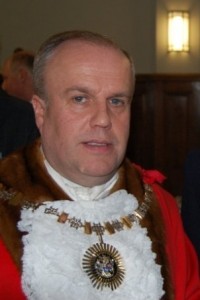 This is not the typical Wags story, but a rather strange whodunnit involving a former Arsenal striker. The man in the picture is an openly gay Tory politician called Brian Coleman, who was last year stripped of all Authority by Barnet council, so now has loads of time to play at a mobile casino or watch football games!

So the 51-year old is an ex-mayor of Barnet in North London and is now an independent member of the council. He is renowned for courting controversy in political circles, but has now got the football world talking after making this throwaway statement on his blog.

“For someone who has little interest in football, although I did attend Barnet vs. Port Vale at Underhill a couple of years ago and once slept with an Arsenal striker, I am not fussed if Barnet survive in the football league or where they play.”

He’s dropped a bit of a bomb there. The question is, who could it have been? I suppose it is likely to be somebody around the same age, give or take a few years. Coleman was elected as a councillor for Barnet back in 1998, so we may be looking around that time.

The main three Arsenal forwards in 1998 were Bergkamp, Wright and Anelka, and Christopher Wreh had joined from Monaco. Kanu and Diawara joined the Gunners the season after, but those times may be wrong. Also, from his own admission, the man knows nothing about football, so he could have got the position wrong (steady). I wonder if this will lead to further revelations. Does anybody know any more?

6 thoughts on “Who is the gay Arsenal striker?”