Last week we paid witness to the crowning of Luka Modric as winner of the Ballon D’Or 2018, and delving deeper into his homelife, you come to find that his wife was a huge motivator to his career, and a key in his rise from a Dinamo Zagreb midfielder up to the World’s best player. I bet there are not many people that would have backed him to beat Messi and Ronaldo, not even if you used a promocode from matchbonuscode.co.uk. But all footballers should aspire to greatness and try hard not to get distracted from their goals.

We have seen so many top English players especially fail to reach their full potential, and many like to claim that the money involved in football is a main focal point in player’s not needing to push themselves to further their careers, most likely because they are thrust into richness and comfort before reaching the highest level, but could the company they keep also be huge? 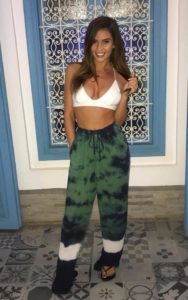 Let’s look at Nathan Redmond and his luscious lady Emma Milton, who some of you are more than likely well in tune with. The former England youth player was tipped to have a bright future in the game, impressing with Southampton previously, but is yet to make the breakthrough into a top, top player.

Now I’m not saying that it is even possible to turn down the advances of such a gorgeous specimen of a women, and not that you should even attempt to, but I can see that needing to keep a woman like this happy would be a full-time job, whereas Modric on the other hand had his partner quit everything to push her man into furthering his career, and I don’t believe Luka could have gotten so far without her.

Milton Is a regular jetsetter and social media goddess with over 60,000 followers on her Instagram alone, and has a rich taste for designer clothing and jewellery, and you just know that her taste comes with demands. That no doubt keeps him busy off the pitch, and maybe that will be his downfall.

It doesn’t surprise me that the likes of Cristiano Ronaldo and Lionel Messi’s other halves are rarely in the spotlight, and maybe, just maybe, having less distractions off the pitch are more important to a football player’s progression in the real game than ever before, and harder to come by also.