The biggest scandal in my memory was the time that then-England captain John Terry was caught cheating on his wife, but not only was he doing the dirty on his lady but doing so with team-mate Wayne Bridge’s other half! In all honesty, I’m not sure any red-blooded male could turn this down if put on the plate…

Vanessa Perroncel – Wayne Bridge's ex and John Terry's bit on the side. pic.twitter.com/HY7dk7JJwd

The event rocked the England set-up, with the centre-back being removed as captain, while the former Leeds star ended quitting from international duty earlier than usual, whether it by choice or not is debateable…

More recent memory will also tell you that England and Wales legend, Ryan Giggs, who has now been handed the managerial reigns for the Welsh international side, was found to have been having a long-standing relationship with his own brother’s wife, but we will be concentrating more on the stars who betrayed their team-mates today, and not their own family members!

Many of you will have a hatred for Chelsea and their players for a number of reasons, be it the Anton Ferdinand Racism saga, the PSG train incident involving a section of fans, or maybe even dating back to the hooligan days where more than one big firm was associated with the club, but this list will certainly not bring any more love to them, unless you are all for men being womanizers and taking what they want regardless of the consequences.

German footballing legend Michael Ballack is said to have had relations with former team-mate Christian Lell’s now-wife Daniella Aumann. The scorned husband even talked about the Chelsea and Bayern Munich midfielder, stating: “Ballack enters into other people’s private lives and ruins them without further thought. But maybe when you are the Germany captain that’s how you think.” 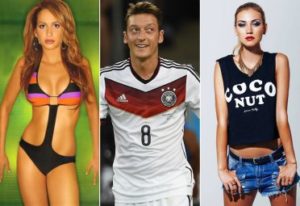 Ballack wasn’t the first team-mate to steal the advances of one of Lell’s girlfriends shockingly however, with Mesut Ozil also having been caught sleeping with his now ex-girlfriend Melanie Rickinger. Turns out the Arsenal midfielder isn’t only good at setting up the goalscoring opportunities hey…

The last duo to make the list is two more Chelsea players with Thibaut Courtois and Kevin De Bruyne having fallen foul of each other. The shotstopper recently moved to Real Madrid, but back in 2013 it is claimed that he slept with De Bruyne’s Mrs, Caroline Lijnen, the duo were both out on loan from Chelsea at the time.

We all know that men are susceptible to the odd beautiful woman, but where is the ‘bros before hoes’ brotherhood?

One thought on “The Chelsea and Arsenal players famous for stealing their team-mates WAGs!”