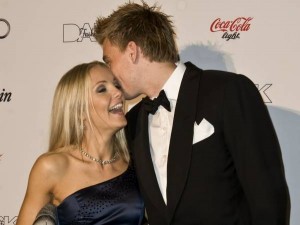 Molise then announced to the waiting press the good news that it was a bouncing baby boy and everything went well in the birth.

As an interesting aside, when Bendtner and Lady Caroline first got together last year, Scandic Bookmakers released a few specialist fun prices to celebrate the fact. One of those bets offered odds of 100/1 on the celebrity pair to have a baby together in 2010 and one lucky punter put 200 kronor on it for a bit of fun.

“When the pregnancy was first announced in the middle of 2010, we thought in fact that we just might save the money if the baby was born in the New Year. She was set to give birth later. But then came the Caesarean!”says Fred Forest from Scandic Bookmakers.