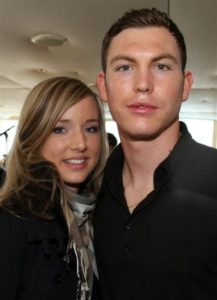 Arsenal’s new regime after the departure of Arsene Wenger has got off to a great start as they have already completed their first signing of Stephan Lichtsteiner, the Juventus right-wing back. The 34 year-old may be getting on a bit but he is currently with the Switzerland national team, as captain, preparing for the World Cup.

Switzerland may be one of the outsiders in the football World Cup Betting but you have to be in it to win it and he will join another Arsenal player, Granit Xhaka, to try and pull off a shock in Russia.

But we are here to talk about Stephan’s missus, Manuela Lichtsteiner. They met when they were very young; Manuela is a fitness instructor and an economist. This could be one of the reasons Stephan improved his fitness and became such a successful footballer!

They got married in 2010, Manuela gave birth to their first child; daughter Kim Noemi on January 30, 2011; in Switzerland and to their second child in 2014, but she still remains very fit and glamorous, as you can see from the pics.

They are a very happy and successful couple and you certainly won’t hear any whiff of unfaithfulness from these two. A wonderful life, two wonderful kids, and a new job in London for a few years to keep them amused.