There are going to many new England World Cup Wags this year as the squad has had many changes in the last four years, but one WAG that is certain to set the Copacabana Beach parties alight is Daniel Sturridge’s girlfriend Jourdan Dunn.

The 23 year-old is famous in her own right, and has not only worked for Victoria’s Secrets but has recently been named as the official face of Maybelline New York, which is no mean feat for a young Londoner that was discovered in Primark at age 16!

By the time she was 18 she was named as British Fashion model of the Year, and has appeared on the covers of Vogue all over the world as well as too many other famous magazines to mention. In fact she must certainly be more well-known worldwide than Daniel Sturridge and she could take a bit of pressure off him if they are seen out together in Brazil.

Let’s hope that she doesn’t distract the Liverpool striker too much as England try to overcome the 30/1 odds of actually winning the World Cup, but if you think they can cause a shock then you may even get better prices if you check out all the top betting sites at www.bestbettingsites.co. 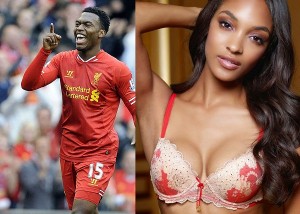 Sturridge may be one of the outsiders to win the Golden Boot, but Jourdan is certain to be named Best British WAG!!!!