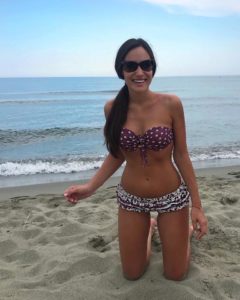 Caterina Ciabatti is regularly spotted sitting alongside Federico’s father, former prolific goalscorer Enrico Chiesa in the stands on matchday, and is believed to spend a lot of time with the rest of his family also.

While she is certainly not a bimbo, she is well adept to the WAG lifestyle as seen by her regular social media followers, with regular updates of her engagement ring which she is ecstatic to share on a number of occasions, as well as keeping her followers up-to-date with her astonishing wardrobe.

The eye-opening beauty could well be set to set the English Premier League alight with her presence, with PL giants Chelsea and Liverpool both believed to be keeping close tabs on the Italian international. If either of those teams managed to get this super player, i would definitely be going to esports-free-bets.com top have a bet on them to win the League. He is that good!

It remains to be seen whether either side will weigh in with an offer come January, although argument could be made that neither side will be looking to add to that position before the season’s end.

There is much speculation that Mohamed Salah and Eden Hazard are wanted by a number of European giants, with Real Madrid most strongly linked with the latter. Either departure would certainly send the selling club into delving into the transfer market, and he could potentially be an option.

The Belgian was strongly linked with the Bernabeu during the summer just gone, with many believing he was the first choice to come in after the departure of superstar Cristiano Ronaldo, who has joined Italian outfit Juventus.

Whether or not Chiesa and his soon-to-be wife do decide to grace the Premier League with their presence, we can all certainly admire her (or his) form from a distance in the mean-time…

If I was a Chelsea or Liverpool fan I would want to see BOTH of them at my club!