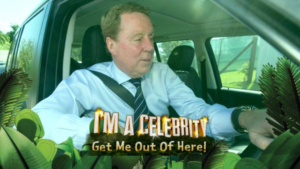 Harry Redknapp is in the spotlight as he gears up to battle all the challenges set upon him whilst living in the Australian outback on ITV’s reality TV show I’m A Celebrity Get Me Out Of Here, and he is coming across pretty well. He is currently the second favourite at around 7/2 to be the top man in the programme, and if you fancy a bet check out your best deals check out the online betting before putting your money on. I think ‘Arry is definitely in with a chance!

The 72 year-old former Tottenham Hotspur manager appears to be enjoying himself so far, although he cannot be much use to his camp-mates domestically, having publicly admitted that he can’t even make a coffee, let alone cook. His wife Sandra is the one who adheres to all his needs at home.

The couple have two sons, both of which have a keen eye for gorgeous looking ladies, although the younger, Jamie, is currently getting used to life as a divorcé. Louise and Jamie confirmed their divorce in December of last year, and all seems to be amicable to say the least.

Harry Redknapp is refusing to dish any dirt on his son’s ex-wife despite the cameras closely watching his every move on the hit show, and he has previously publically praised the character of Louise. He said: ‘She may be a popstar temptress to the youngsters who read those laddish magazines but to me she’s just a lovely girl who’s married to my youngest son.’

He also wrote about her in his autobiography, claiming: “Louise, who made it big with chart-toppers Eternal before becoming a major popstar in her own right, is the least showbizzy person you could imagine.

“She’s so quiet and shy away from the spotlight that I can’t believe she has the front to go live on stage in front of thousands of people.

“I see her in those glamorous videos for her latest record and find it impossible to reconcile the sexy image I see on-screen with the Louise who comes to my home with Jamie for Sunday dinner.”

Harry’s son Mark on the other hand is currently living with his wife and two children also, with one of his son’s, Harry Junior, currently training with Bournemouth’s youth sides, the club where Mark was progressing until picking up a serious injury at the age of 18.

Mark had gotten himself into trouble earlier this year for being around 15 times over the ‘drug-drive’ limit, with a derivative of Cocaine in his system when tested, although he went onto deny all charges against him.