However, away from the action it is Pique’s relationship with Colombian pop sensation Shakira that fills his contemporaries with envy.

The pair have been together since 2011 after meeting while recording Shakira’s music video for the official World Cup song for the 2010 tournament in South Africa.

Pique and the South American songstress also have two sons together, Sasha and Milan.

But, earlier this month there were rumblings that there was trouble in paradise, with rumours that the glamour duo had parted ways and decided to split up.

However, those punters wagering on Just a Game Slot would be advised not to bet on the famous partnership fracturing any time soon.

The latest indications suggest that these stories are not true and Pique and Shakira remain committed to each other.

The Barcelona star has been busy on social media, posting a photo of himself with his partner rehearsing in the background, before the pair were then pictured in a mask shop and in the defender’s car. 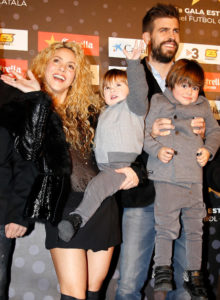 Shakira has also reiterated the importance of Pique and their children in her life.

“My family is the centre of my world,” the Colombian singer recently said. “We are very passionate, very intense. We live everything to the maximum.”

It would be understandable if Pique was slightly pre-occupied and distracted at the moment, with the 30-year-old having a lot on his plate.

The cultured centre-half has played an important role in Barcelona’s strong start to the new season under Ernesto Valverde, with the Camp Nou outfit unbeaten as yet and on top of La Liga and their Champions League group.

However, with politics in Barcelona coming to a head over potential Catalan independence, Pique has been a strong advocate of the region he was born in becoming autonomous.

The defender has even suggested that his future playing for the Spanish national side may be under threat give his allegiance to and longing for a Catalan state.

However, despite the pair’s busy lives, it appears that Pique and Shakira will stick together – and the rest of the men in the world remain jealous of the Barcelona enforcer.