Gary Lineker has come under criticism for defending his club’s star striker Jamie Vardy over an incident last summer. The Leicester City top goalscorer was filmed calling an Asian man a ‘Jap’ whilst in a casino, and the face of Walkers Crisps moved to defend him.

Lineker claimed that football was generally not racist, and that the striker was most likely caught up in the moment, as a passionate person, who participates in a passionate sport. ‘People make mistakes. They say stupid things. He did it and he apologised.’

When pushed if racist remarks could be written off as a mistake, Lineker added: ‘I think it depends on how you say it, and where you say it. But I know footballers, and they are generally really not racist at all.

‘I’ve heard things said on football pitches that players clearly don’t mean, whether it’s racism or just an abusive comment in the heat of the moment.

‘Fundamentally, footballers don’t look around a dressing room and think: “He’s a black player … he’s Japanese.” They don’t think like that. They think: “He’s a good player, he can help, he’s not very good.”

‘I’m not trying to defend anyone’s actions but there are going to be isolated incidents because it’s an emotive, passionate sport.’

Our opinion on the matter is that he should simply have stayed at home with his beautiful WAG Rebekah Nicholson, and visited an online casino instead. Numerous exciting casino games can be accessed online with any gadget on sites like Slot Heaven. There are numerous online slots games on slot heaven which can be played for money or just for fun. 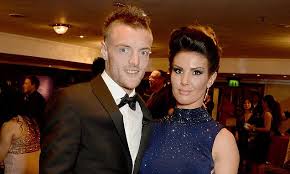 Vardy could have done without the negative press as he looks forward to an exciting end to the season with his club, where they look almost certain to lift an unlikely Premier League title.

The striker will then look forward to his first international tournament with England, with him being a shoo-in for the European Championship squad.