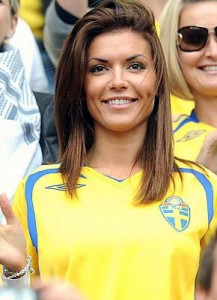 The only problem I have had this week here at JustWagsNews was deciding which Swedish WAG to write about! Sweden can certainly produce gorgeous models and talented footballers. It may be cold in Sweden in the winter but I’m sure this lovely lady would be able to rouse most of the male Swedish population and probably most European males out of hibernation.

Take for instance Christian Wilhelmsson who currently plays for AL-Hilal FC and plays mainly as a right winger. Gaining his first cap in 2001, Wilhelmsson represented Sweden at UEFA Euro 2004, Euro 2008 and the 2006 FIFA World Cup, featuring in every one of the national team’s four games in the latter tournament, and starting in two.

Now less about the footballer and his skills and more about the sizzling wife and her skills. Wilhelmsson married Swedish model Oksana Anderson in May 2010 in Las Vegas. 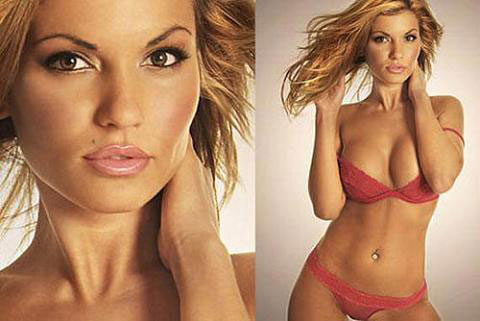 Oksana Wilhelmsson, was born 2nd July 1984 in the Soviet Union but moved to Sweden with her family when she was 10 years old. The married couple now have a beautiful daughter, Naomi, born in 2011.

Oksana initially worked as a dancer for the Swedish Pop Group Sunblock, who played a type of electronic music she could quite happily gyrate too. But obviously these amazing looks and this perfectly shaped body were quickly noticed and so she began a very successful career in modeling. She has appeared in FHM, Maxim and Nuts too. (Obviously there are other well named magazines available on the market, that she has also appeared in!)

In 2005 she was a contestant on the Swedish version of Paradise Hotel, a reality show where a group of single people live in a luxurious Hotel and she managed to land herself in a heated debate with fellow contestant Olinda Borggren before being voted off the show in her first week. ! Oh don’t you just love feisty ladies..