Capello may have shot himself in the foot by inviting David Beckham to accompany the team despite his injury. Of course the other half of the Beckham dynasty, Victoria, will be there to show off her latest fashion accessories.

But this has sparked a glut of other WAGs willing to follow the Queen of the WAGs to the touchline to cheer their fellas on. Colleen Rooney, Abbey Clancy and Alex Gerrard have already publicly announced they will be there to give their support (and buy lots of new handbags of course!)

One WAG that won’t be going is the wife of Rio Ferdinand. The Man Utd defender clearly was against the idea when he spoke about the WAGs at the last World Cup: “It seemed like there was a big show around the whole England squad.” he said. 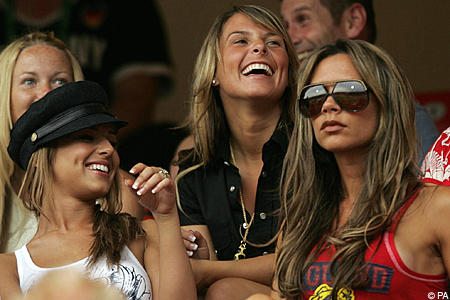 “It was like watching theatre unfolding and football almost became a secondary element.

“People were worrying more about what people were wearing and where they were going out rather than the England football team.”

Here is an interesting question…Will Cheryl Cole be invited to join the other WAGs? LOL!