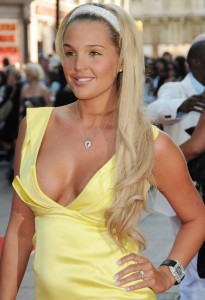 But Jamie thinks that he is playing much better football since linking up with Danielle, and even more so since they found out that she was pregnant.

“Since I found out I’m going be a dad it is an unbelievable feeling and it has already made me grow up a lot.

“This has been my best season in terms of performance and having a settled home life has played a big part in that.

“Hopefully I can play well at Liverpool and we can win, even if it means getting a bit of earache.” 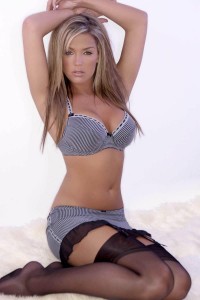 The baby is expected in July, and the happy couple were seen out buying baby clothes last week. WAG watchers claim that Danielle was mostly buying blue, hinting that the baby is likely to be a future footballer!

Danielle announced that she was extremely happy with the news, especially as she thought she would never be able to have children. The announcement said: “I am pleased to confirm Danielle and Jamie are expecting their first child.

“Danielle is due to give birth at the end of July and is very excited but slightly nervous at the prospect of becoming a mum.

“Danielle was overjoyed with the news she was expecting.

“Having been a sufferer of polycystic ovary syndrome, she was once told she would never be able to have children, which makes the news more exciting.”

Congratulations to the happy couple! She certainly has the right assets to keep her baby happy!