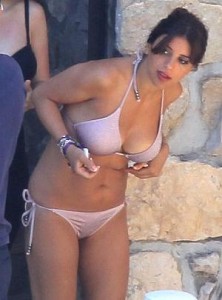 Just a couple of months after splitting up from his childhood sweetheart Carla, the Arsenal captain Cesc Fabregas seems to have found a new Mystery Brunette.

Strangely enough the new woman looks uncannily like Carla, and the Daily Mail originally reported that they had got back together, but soon changed the story when they realised their mistakes!

Fabregas and the woman, known only as Daniela, were enjoying the sun drenched beaches in the south of France, and looked very at ease in each others company. The 24 year old mystery woman showed off her flattering body by wearing a yellow monokini, a n outfit that forced Fabregas to take a dip in the sea to cool off!

Later on she was seen giving him a massage at the pool side before they entered the pool together. He didn’t look to upset in Daniela’s company, anything but, and he appears to be over his recent split from Carla, but that’s footballers for you, they move as quick off the pitch as they do on it! 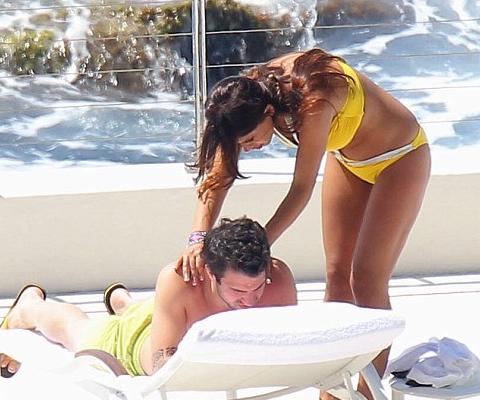 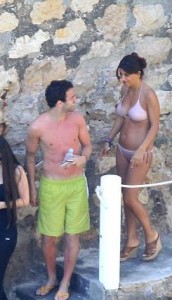 The same afternoon the couple appeared with Carlota, Fabregas’ sister, as they took to the high seas for a jet ski ride. Daniela had swapped her yellow number for a very revealing two piece bikini, a costume that showed her stunning figure off beautifully. Daniela once again was not afraid to put her arms around Fabregas as she held on tightly as the pair sped through the water.

A move to Barcelona seemed to be the last thing on his mind as he could hardly keep his eyes, or hands for that matter, off his new lady friend.

8 thoughts on “Cesc Fabregas has a new squeeze!”