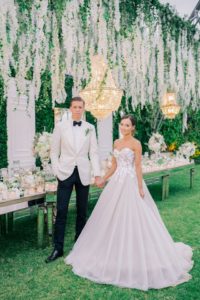 The Arsenal goalkeeper Wojciech Szczesny may have lost his place in the Gunners first team squad since the arrival of Petr Cech and David Ospina, but he seems to have made a success of his loan period at Roma, and it is likely that he will remain there next season and perhaps for the forseeable future.

But the Polish international has been far from despondent since leaving Arsenal and he has taken advantage of the romantic Italian ambience and tied the knot with the stunning singer/songwriter Marina Luczenko, who has had many hits in Poland.

Marina is famous in her own right and used to her contacts to get James Arthur to sing at the wedding and they even performed a duet together! She recently released the song “On my Way” in English, which is pretty good even though I say so myself!

She looks quite stunning in the official video, which I will attach below so you can see for yourself. No wonder Wojciech wanted to tie the knot officially so quickly.

Szczesny is known to be a bit of a bad boy and is not averse to being seen out at nightclubs and casinos, and is famous for being caught smoking by Arsene Wenger straight after Arsenal games. I can’t find find out where the happy couple went on their wedding night but you bet your life they weren’t at home having fun with online slot games, but they may have spent some time at a real casino with their friends. If I was Wojciech I wouldn’t have been watching any television either!

They certainly look very happy together and if they have to carry on living in Rome that’s not such a bad place for a bit of romance….