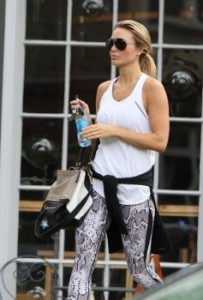 Alex Gerrard is looking as good as ever, as she prepares to jet off on holiday to America with husband Steven.

The couple are moving to Los Angeles this summer, with the Liverpool captain set to join David Beckham’s former team LA Galaxy. The gorgeous WAG has revealed she lives a healthy lifestyle, and will be more strict with herself when preparing for a holiday that she wants to make an effort to look her best.

“I’m always exercising and trying to be healthy, it’s sort of just my lifestyle. If I’ve got a holiday coming up in that I want to make an effort for, I’ll be a little bit more strict and try not to drink either.”

She joked that she wouldn’t do that for any more than three weeks, or risk losing her drinking ability.

She continued: “I’ll be doing that just two or three weeks before, anymore and you end up falling off the wagon!”

Her husband played his final competitive game at Anfield at the weekend, but didn’t get the send-off he wanted, as Crystal Palace came from a goal behind to win 3-1. That was a totally unexpected send-off for Stevie and if you had used May’s William Hill bonus to bet on that result you would have won a fortune!

Oh well Stevie! Maybe you’ll have more luck in America, we will still keep an eye out for you (or more your Mrs) in LA.