As one competition ends, the Premier League is due to start in a matter of weeks, and Premier League footballers are once again the bread and butter of the footballing world. Considering that a growing number of British women like to follow football, it is not just the players’ immense talent on the pitch that impresses, but their finely chiselled and jaw-dropping looks that take centre stage.

As a result, football ticket company, Ticketgum.com sought to find out the opinions of 1,244 British women on which players from the top Premier League teams they would date if given a chance.

Ticketgum collected the data by providing the respondents with the footballers from the first team from the top 10 clubs from last seasons’ Premier League table 2017-18. From this list, the respondents were asked to choose 3 players who they were most attracted to and who they think would make a great first date.

The results show that the player considered the most ‘datable’ by British women is Fernando LLorente (52%) from Tottenham Hotspur. Following in close second is Loris Karius (50%) who plays for Liverpool. Arsenal’s Aaron Ramsey made the Top Ten with his rugged Welsh looks. 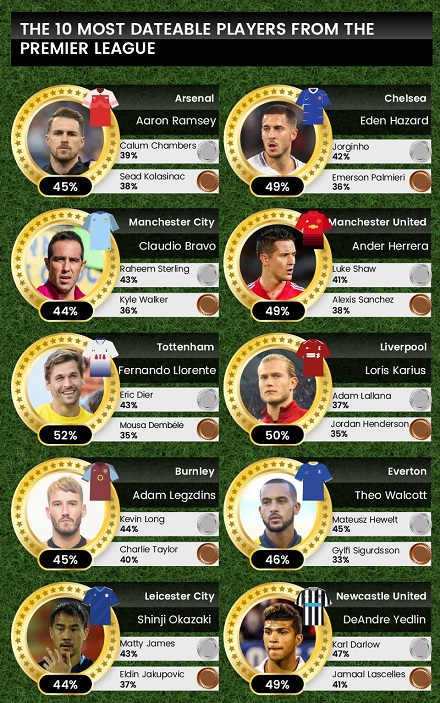 Other notable date worthy footballers includes names such as Eden Hazard (49%) who plays for Chelsea, Deandre Yedlin from Newcastle United (49%) and Theo Walcott (46%), who plays forward at Everton.