She is taking it very seriously, and after coming second in the Central Championships in the last competition, is among one of the favourites to win in Glasgow.

“Preparations have lasted six weeks instead of the usual four; I want to be that little bit better,” she said.

“I’m not a drinker anyway, but I definitely don’t touch anything during the run up to a competition. No takeaways, and I don’t eat out either. If I have a friend’s birthday or anything to go to I have to sneak my salad in with me.” 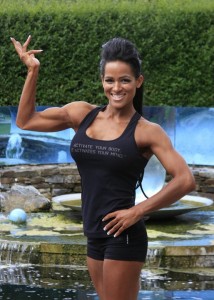 The competition is run by the BNBF, who frown upon any indication of drug-taking by the contestants: “It is the only federation in Britain to drug test all of its winners, and every finalist has to undergo polygraph testing,” she said.

“The sport would be a lot more mainstream if steroid use was taken out. It’s not such an achievement and I will always stay natural. It’s important to be consistent and dedicated when training.”

Her brother Theo and his sexy girlfriend, Mel Slade, will be in Glasgow cheering her on, and she likens the competition to an acting job.

“It’s a performance, I studied drama when I was younger and this is just another way of performing on stage. I love it, and I enjoy it. If it’s not fun, why do it? I feel in the best shape of my life.”

She looks pretty FIT to me!

5 thoughts on “Theo Walcott’s sister is aiming for the top – at BodyBuilding!”