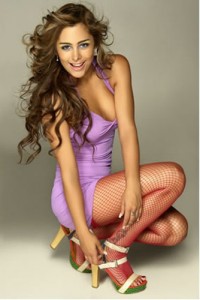 Larissa Riquelme may not strictly be a WAG, but she is Paraguay’s top lingerie model and has become the official cheerleader of her country as they attempt to reach the World Cup semi-final today.

She has promised to run around naked if Paraguay win the World Cup, just as Diego Maradona said if Argentine do it. I know which one I would rather watch!

“If Paraguay reach the semi-finals or final I will strip naked in the Plaza de la Democracia,”

But she qualified it when asked if she would be totally naked: “Of course I will,” she said, “but with my body painted in the colours of Paraguay.” ......Read the full article here 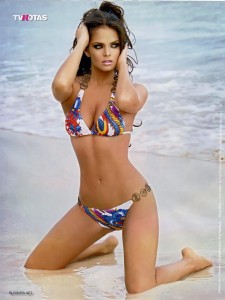 Marisol Gonzalez is a former Miss Mexico, and is extremely famous in Mexico. She has been dating the Mexico legend Cuauhtemoc Blanco for some time, which has dono no harm at all to her reputation.

Like all good WAGs she is not shy when it comes to sexy photoshoots, and she graced the front cover of “H” magazine recently in a special World Cup glamour edition.

As you can see from these photos she is definitely a most gorgeous addition to our World Cup WAGs collection, and would probably reach the semi-finals at least. ......Read the full article here