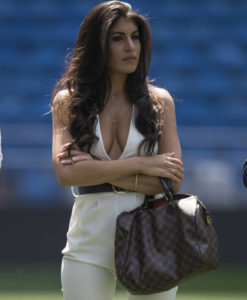 The Dominican Republic International player, formerly part of Real Madrid’s B and C teams, has been signed back on to the Los Blancos squad for a £23 million contract deal. And while the 25-year old is still focussing on improving his skills on the field, his partner has been stealing all the limelight, especially during his unveiling at the Santiago Bernabeu.

His partner comes in the form of supermodel and swimwear designer Yaiza Moreno, and the 24-year-old has already become one of this year’s hottest wags.

Their Early Years and Now

Moreno and Mariano first met back in 2012 when the player was still a junior for Real Madrid. After he moved over to France in 2017, Yaiza decided to follow him, and become one of his most avid supporters. His career saw him rise to become one of Ligue’s most popular players.

And while Mariano has been making waves in the football world, Yaiza has been doing the same in the social media and modelling world. Her Instagram, which currently has over 35.5 thousand followers, keep up with every new photo that she posts – some being simple amateur shots, while others previews of her more professional works. One of her more popular pictures include her dog, a British Bulldog who has become a star of his own.

The model recently launched her own line of swimwear, under the brand name of Mystery. Some of the swimwear she produces include beach dresses and a series of accessories. Mystery has already received significant praise thanks to the lower than average pricing model, making her line of clothing and accessories accessible to all, so you don’t even have to win a online pokies jackpot in order to be able to buy them.

Along with her love of posting selfies, much to her followers excitement, the social media magnate has also stated that she’s looking forward to becoming friends with other football wags – something that has been made far easier now that Moriano has taken up CR7’s mantle. Her popularity and flare for design has many seeing her as a welcomed replacement to Georgina Rodriguez.