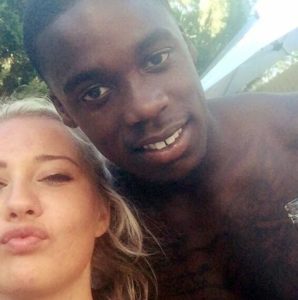 The Ghana international hooked up with Natasha Taylor whilst on holiday in Marbella, and but it turned out to only be a fling, although that did not prevent from his baby-mother from coming across pictures of the pair on social media.

Callan clearly recognised his former fling in the night-club, coming across her in the toilet in a night-club in Leicester, where they both live, and lost control of her temper. What happened next suggests she would have been better off staying at home and trying to win the jackpot at an online casino instead. Dare I suggest she should try this game next time!

Natasha Taylor said: “I was in the toilets minding my own business and I was washing my hands.

“She was staring at me. She said ‘oh, it’s you’. At first I didn’t realise who she was and asked her what her problem was.”

It would then appear that Callan then got her mates to help gang up on Natasha, and police were called to break up the confrontation. No investigation has been opened thus far, but should a complaint come in with more information, then a case could be made. A spokeswoman for Leicestershire Police said: “I can confirm that we had a report of an alleged assault in the premises in Market Place.

“We were called at about 2.30am on the 17th. It was left with the person who reported it if she wanted to make any further complaint.

“We have not yet heard back from her. The investigation has been closed. If we received any further information from those involved we would look into it further.”

If she can’t stop herself from going to nightclubs, perhaps she should check whether Callan is there or not first!