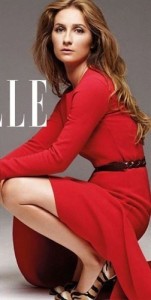 Ursula Santirso grew up in the same town as Santi Cazorla, Lugo de Llanera in Oviedo. Santi spent four years in the youth system at Real Oviedo before being snapped up by Villareal. Ursula knew Santi from an early age.

“When I was nine, I would go with my father to watch him play.”

She is not your typical WaG even though she has got the looks for it. Ursula was studying for a degree in the science of physical education, but decided to cut her studies short and moved to be with Santi after he joined Villareal. She is intelligent but does not court publicity. 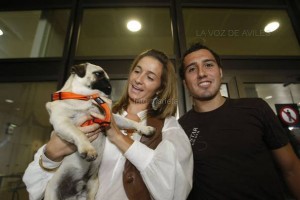 Ursula and a few other partners of players in the Spanish national team were persuaded to do a photoshoot and interview for Spanish Elle in the build up to Euro 2012. Ursula attended the European Championship with the couple’s two-year old son Enzo, and she told the interviewer that all the Wags get on well, being in similar situations.

“About four years ago we were all single, without children…This year we are all getting together with our kids who are, coincidentally, about the same age. Truthfully I an very happy.”

She also tells how being a footballer’s wife or girlfriend forced her to be very independent and to grow up fast. She had to leave her family and friends at a young age and knows how brief a player’s career can be.

She will have to make an even bigger adjustment now her husband has left Spain altogether, but she seems to have her head in the right place. Welcome to London Santi and Ursula.