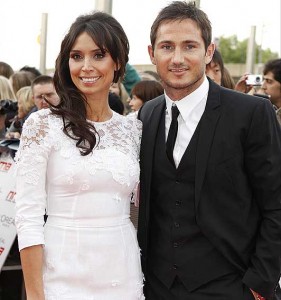 The wedding is expected to be this summer, but with Frank jetting off to the Euros with England it is unlikely to be done until after the tournament, and maybe Lampard could be celebrating with a winners medal under Roy Hodgson?

The lovely Christine has also appeared in Strictly Come Dancing and Dancing on Ice, so is no newcomer to glamourous dressing and her lovely Irish accent has caused many a heart to flutter at the TV.  The couple, who are both 33, love to have fun and were recently snapped a little worse for wear after celebrating Chelsea’s FA Cup Final win over Liverpool. 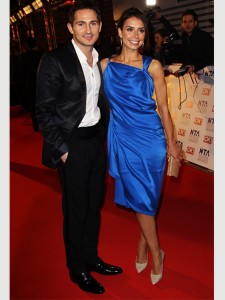 The couple are set to marry in Ireland and there were rumours that Lampard has tried to bribe a couple to postpone their wedding so he could have their weekend at the Galgorm Manor hotel in Co Antrim, but this was vehemently denied by Christine. “I’d never in a million years ask someone to move a wedding. Stuff like that makes you out to be a horrible person.”

But they are not releasing the date of the wedding to the public, and Christine is quite clear that she just wants friends and family around without an invasion of papparazzi.

She said: “I honestly don’t care whether the napkins match the colour of the bridesmaids’ dresses. I just want a low-key, relaxed day surrounded by the people I love.”

They certainly don’t need the money from selling the pics to the gutter press, so I hope she has a lovely romantic day. They make a lovely couple!