With all the new players that have arrived at Arsenal over the passed year, I thought it was about time we did a round up of the best WAGs that around the club at the moment. Arsenal may not always get the best looking players (except for Olivier Giroud obviously!) but they always seem to have model wives or girlfriends.

According to the Sun Bets Premier League betting, Arsenal are 12/1 shots to win the title this season, but as Wenger has already added Alexandre Lacazette and Saed Kolasinac to an already good team, there is no reason why they don’t stand a great chance of winning it this season.

Wenger also brought in some top players last summer, and one of those is the German international Shkodran Mustafi, who got married just before his arrival at the Emirates. So I’m naming his beautiful wife Vjosa Kaba as one of Arsenal’s top 5 WAGs.

What do you think?

Granit Xhaka was another new arrival last year, and the Swiss international brought his long-term girlfriend with him, the lovely Leonita Lekaj. She is absolutely gorgeous as you can see from the photo, so it was hardly a surprise when the lovely couple got married just last month.

Xhaka met Leonita (lovely name, lovely lady) when he was playing for Borussia Monchengladbach in Germany but they both come from Kosovon Albanian families, and they got engaged just a couple of months before his arrival at the Emirates.

Next on my list is the gorgeous Turkish model Amine Gulse, who has taken up with our German playmaker Mesut Ozil. The beauty was actually born in Sweden but won the Miss Turkey beauty contest in 2014 and went on to compete in the Miss World competition. She now lives and works in Istanbul, but she spends a lot of time with Mesut. The 24 year-old stunner was recently seen sporting a new ring amidst rumours that the celebrity couple are likely to get married in the very near future. Mr Ozil is a very very lucky man! 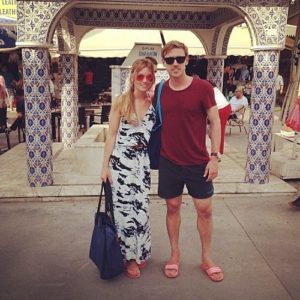 Now we come to Nacho Monreal’s wife – Isabelle Lopez Ramos. Monreal has been at the club for many years and has been spectacularly consistent as Arsenal’s left back, but as he is getting on in years Arsene Wenger seems to prefer playing him in the centre-back role.

He may not be one of the most exciting player to watch in the team, but he certainly has an exciting missus, who famously had an online argument with a teenage Arsenal fan who accused her of only being with the Arsenal man for his money – and she gave as good as she got!

Olivier Giroud may not be first choice striker at Arsenal any more, but his gorgeous wife Jennifer definitely rates a place in our Top 5 WAGs.

She stuck by the French international when the club was rocked by photos taken by his mistress Celia Kay back in 2014, and Olivier was forced to give a public grovelling apology before she would accept him back into her heart.
But they got through it and now have been married for six years. We may not see  so much of Giroud on the pitch but we want to see more of his gorgeous wife!

So there is my Top 5 Arsenal WAGs. Which is your favourite?