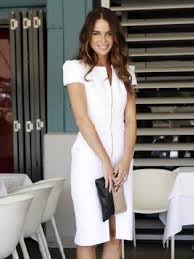 Former Rugby League star Braith Anasta’s wife, Jodi,  has long been known as one of NRL’s most glamorous WAGs, but is now refusing to accept the tag, following her husband’s retirement from the playing field.

Anasta has been modelling since the age of 13, but broke onto the acting scene with a role in Home And Away when she was 20, and now splits her time between acting and modelling.

The 30 year-old is still as gorgeous as ever, and is currently enjoying an ambassador role for This August’s Jeans For Genes Day.

Anasta is now insisting she is not a WAG, as Braith retired with immediate effect back in August.

She said: ‘I’m not a WAG. My husband doesn’t play football. He retired last year.

‘I don’t think labels for women of any sort are appropriate but I understand why they throw that term around so each to their own.

Jodi is now a film star in her own right and her first film role in was in a film called ‘The Cup’, which was released in 2011, and is based on the 2002 Melbourne Cup won by Media Puzzle. It is unknown if she likes a flutter herself but she would hardly need to win a jackpot on slot machines like Tiki Island Games to fund her lifestyle!

Although she is very well-known on the Sydney party circuit she denies there is any truth in her feud with fellow WAG Terry Biviano, the wife of retired rugby star Anthony Minichiello, claiming it was merely ‘nothing’.

She added: ‘There’s nothing there.

‘We’ve known each other for a long time and it’s like everyone in Sydney. You have a lot of acquaintances and you know a lot of people and it’s the same with us.’