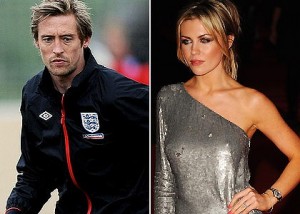 Abbey Clancy, who was ranked 10th sexiest woman in FHM Magazine`s 2010 annual poll, 100 Sexiest Women in the World, fears for her unborn child which is due in March, after Peter Crouch, her fiancé, romped with hooker Monica Hunt on his stag night late last year.

Speaking in Glamour Magazine Clancy, 25, said, “I am worried about stress affecting the baby. I’m a hypochondriac anyway.”

She went on to add, “I don’t like feeling vulnerable. I think my mum and dad`s divorce affected me more than I let on. I don’t like being weak in front of my mum, or anyone for that matter. I don`t like crying.” 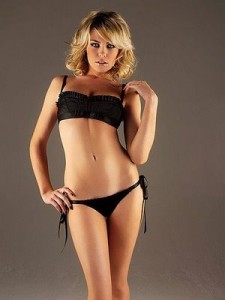 She was quick to emphasise that her relationship with Tottenham striker Crouch was back on an even keel.
“I’m fine, we`re both fine, we’ve got our little baby coming. There are worse things that have happened.”

With Crouch back on the goal trail last night, with the only goal in Spurs away win at Blackburn Rovers, the future is starting to look better for Clancy and her fiancé and dad to be.